Top 8 things to do in Beijing Summer Palace

The Summer Palace lies to the northwest of Beijing, about 25 km away from the center of the City. It has more than 3000 buildings, Covering an area of 290 hectares. What to do there? I have listed my favorite 10 places to see and things to do here.

For other travel tips, please visit my other post: Summer palace travel guide

The palaces near the east palace Gate 东门宫廷区

It is the main gate of the Summer Palace and this area was for political activities and the living chamber of the imperial family. 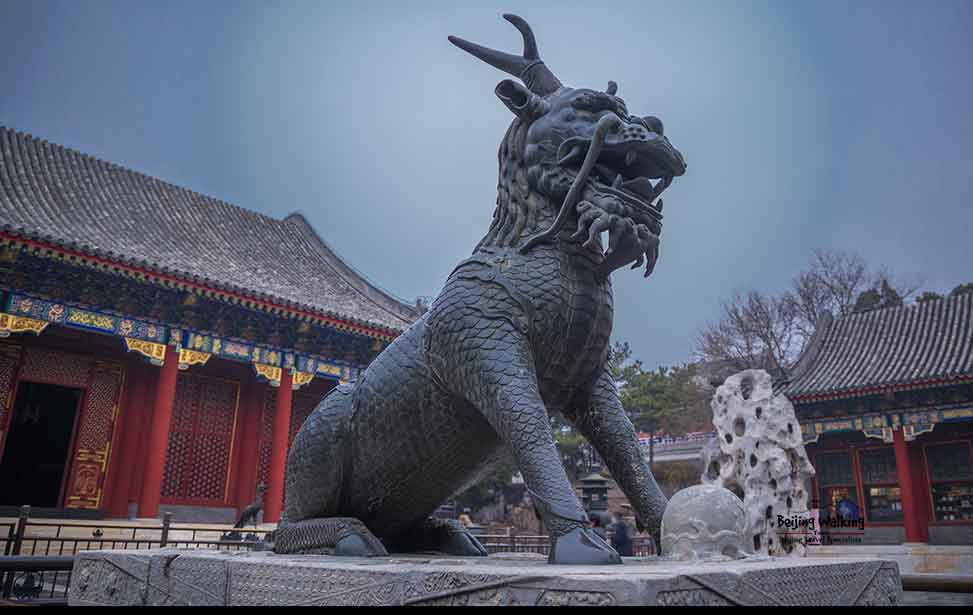 Kylin is an auspicious animal in ancient Chinese culture. It could Avoid evil spirits and detect the good from the evil. It has the head of a dragon, the antlers of a deer, the tail of a lion, and the hooves of an ox.

The name of the pavilion came from a poem by the great Song Dynasty writer Su Dongpo. “The duck in the water is the first to know that spring has come.” 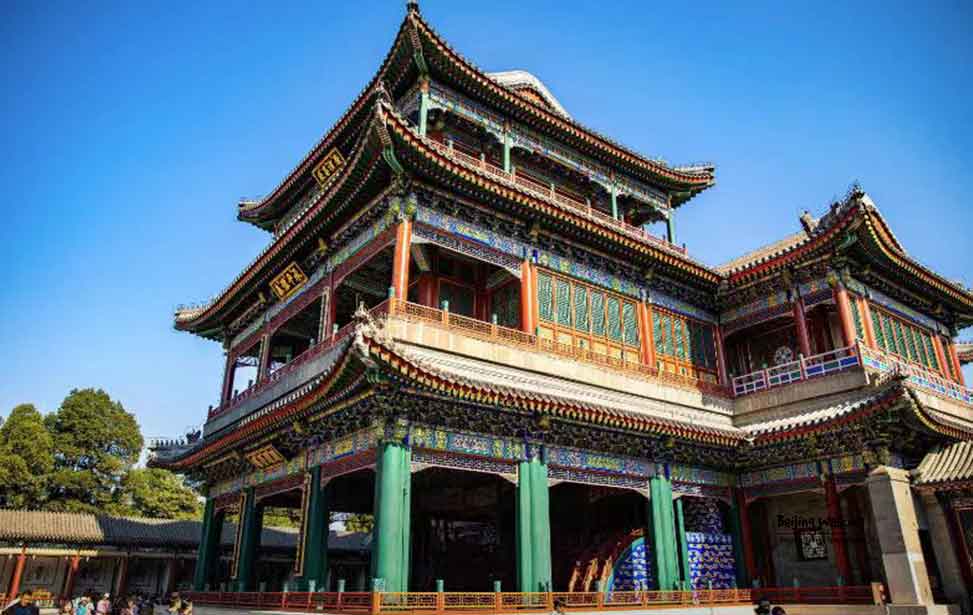 The garden was specially built for empress Dowager Cixi to watch Beijing opera.

4. Hall of Happiness and longevity 乐寿堂 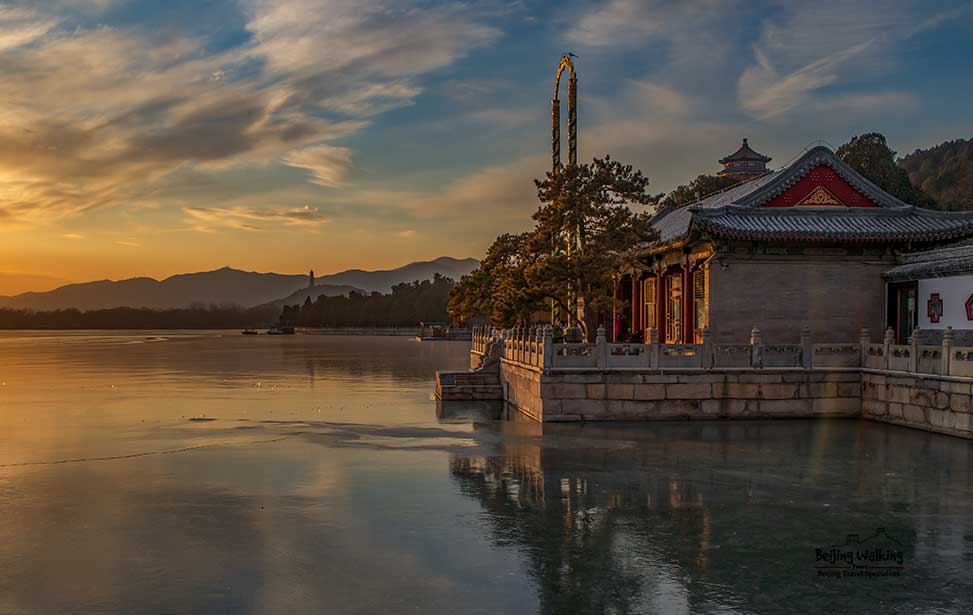 Hall of Happiness and Longevity

The Hall of Happiness and longevity was the residence of Empress Dowager Cixi. 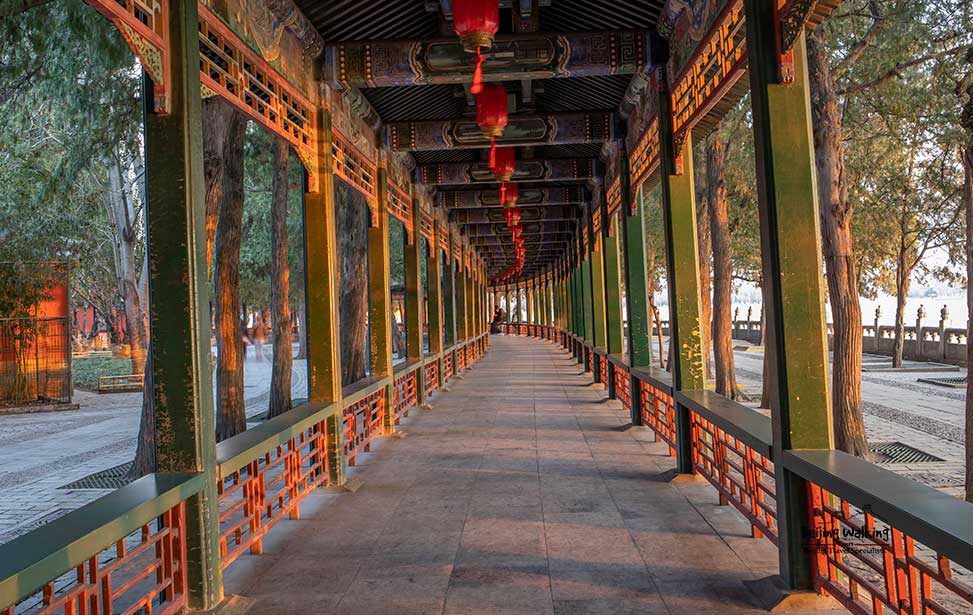 The long corridor is the longest covered walkway and art gallery in the world. It is 728 meters long with 14000 paintings. 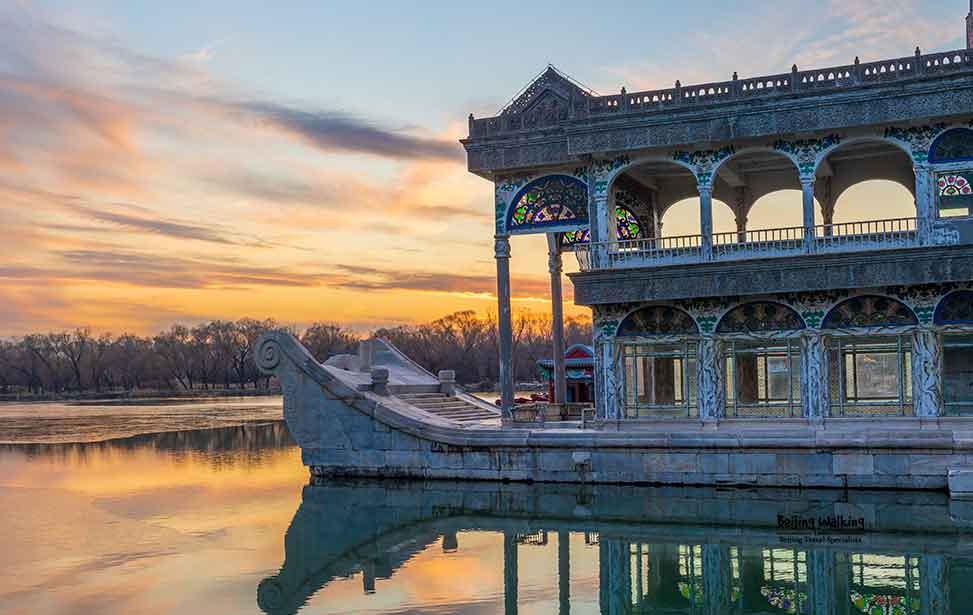 At the west end of the Long corridor is the Marble Boat.”Water can float the boat, but it can also tip it over.” Emperor Qianlong built this huge boat in order to make the allusion concrete which means people could support a good emperor, however, they could also overthrow the Dynasty. He wants to show that his rule of the Qing Dynasty was as firm as the Marble Boat. 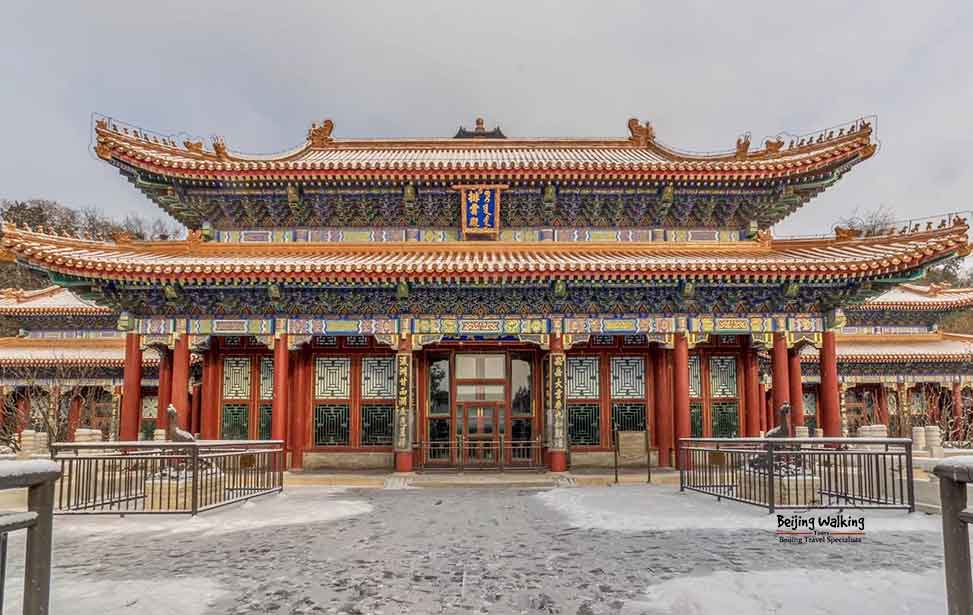 It was where Empress Dowager Cixi accepted greetings from officials on the day of her birthday.

2. The Tower of Buddhist incense 佛香阁 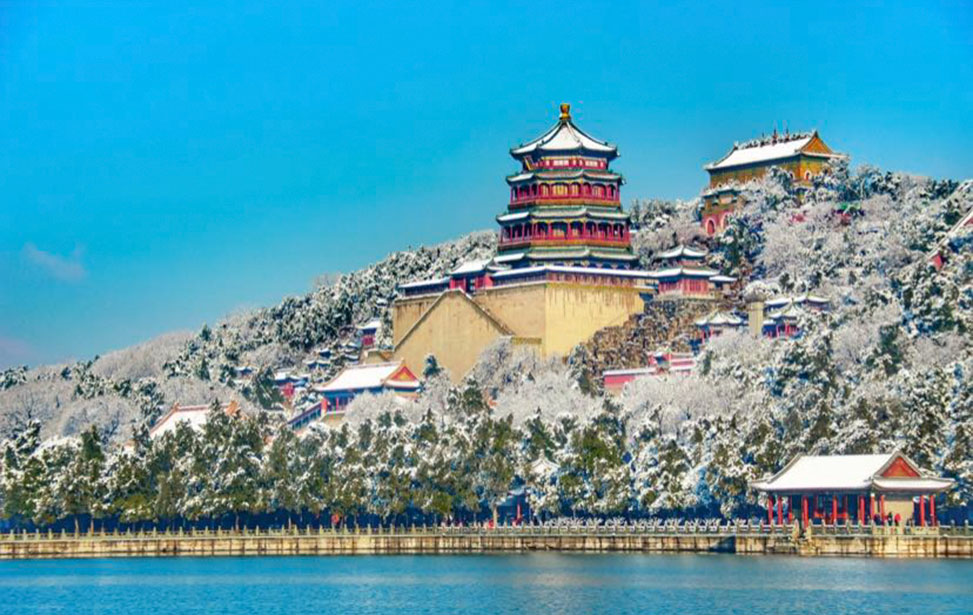 It is the core of the Summer Palace complex. The tower is 36 meters high. 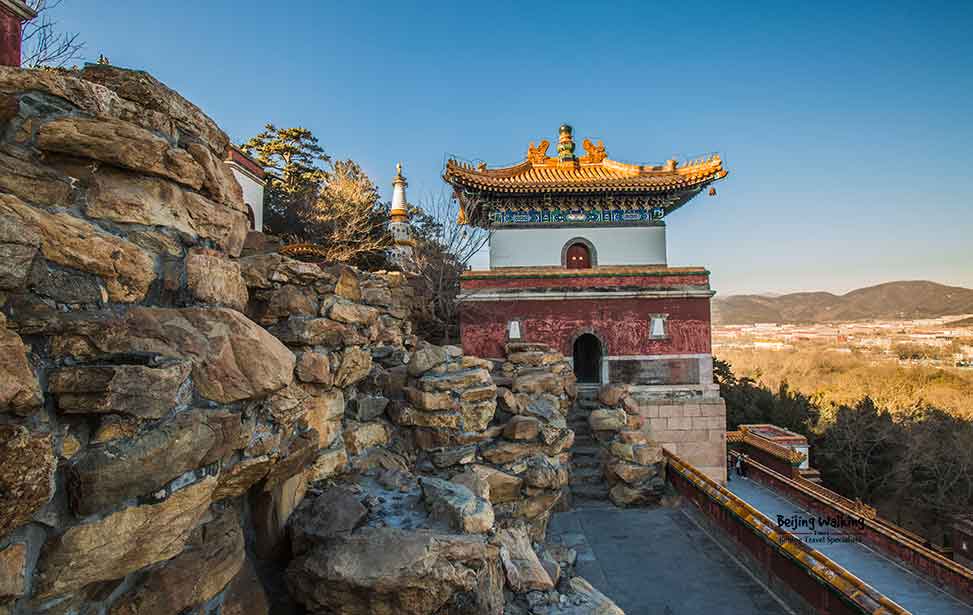 It is on the northside of longevity hill. All the Buddhist buildings are rebuilt before  Beijing Olympics. 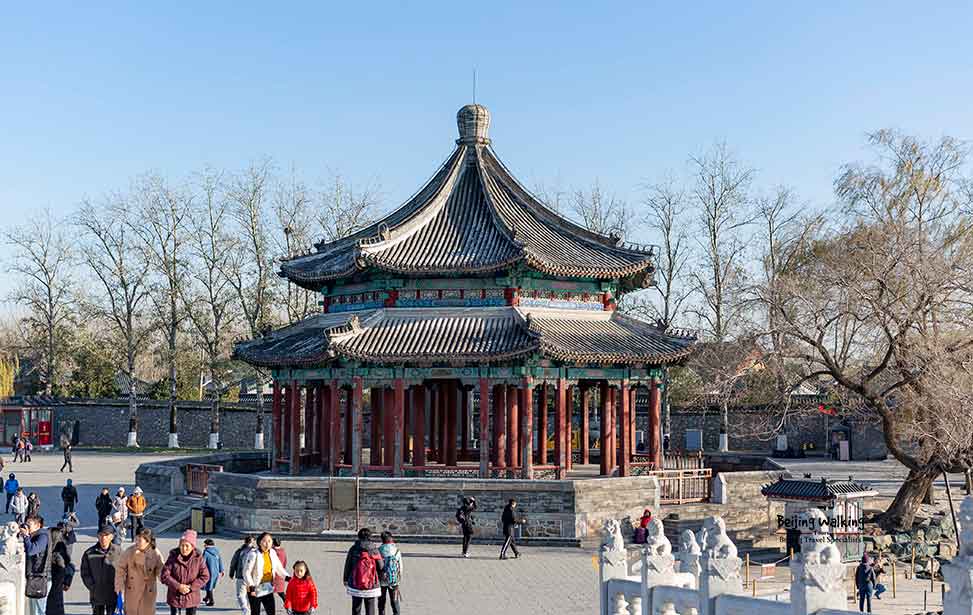 The Ox was a symbol of flood control in ancient China. 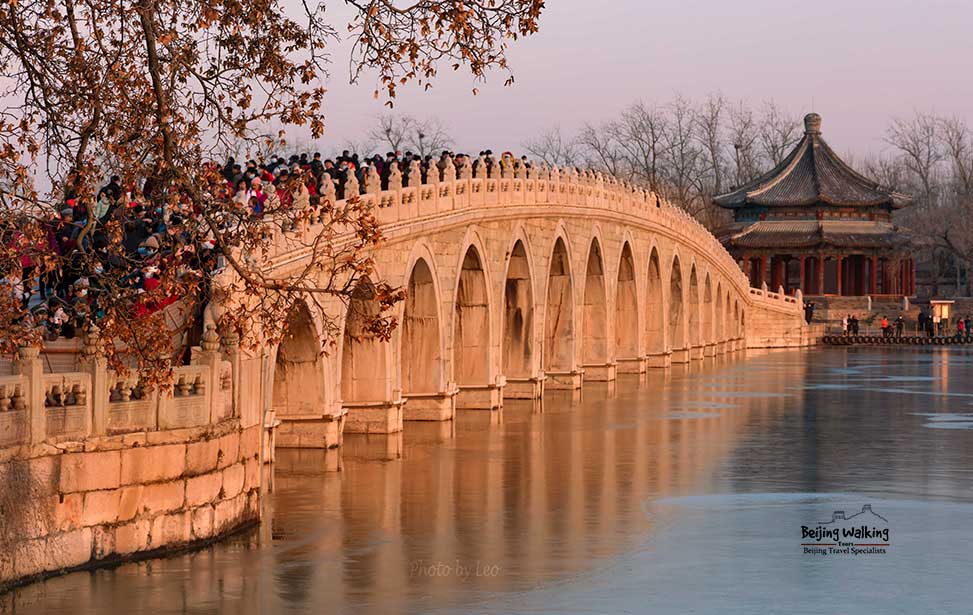 It is 150 meters long and 8 meters wide. This bridge is an imitation of Lugouqiao (Marco Polo Bridge). There are 544 stone lions in different poses on the balustrades.

The bridges in the west dyke 西堤 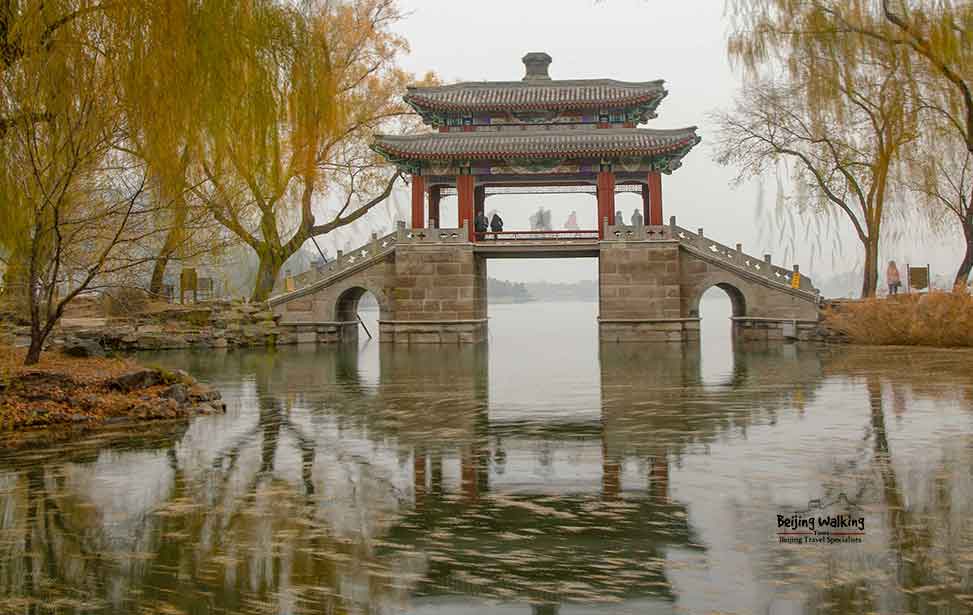 The west dyke is an imitation of the west lake dyke in Hangzhou Zhejiang Province.

7. The building of Bright View 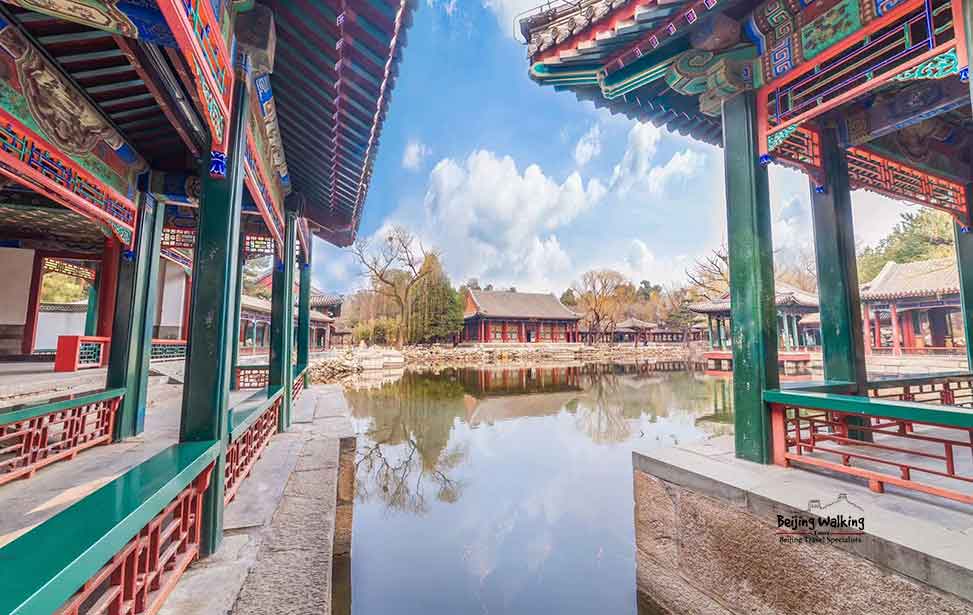 When Emperor Qianlong went south on an inspection tour, he visited the Jichag Garden(Garden for Ease of Mind) in Huishan of Wuxi, Jiangsu province. He liked it so much, so he asked people to imitate it here in the Summer Palace. 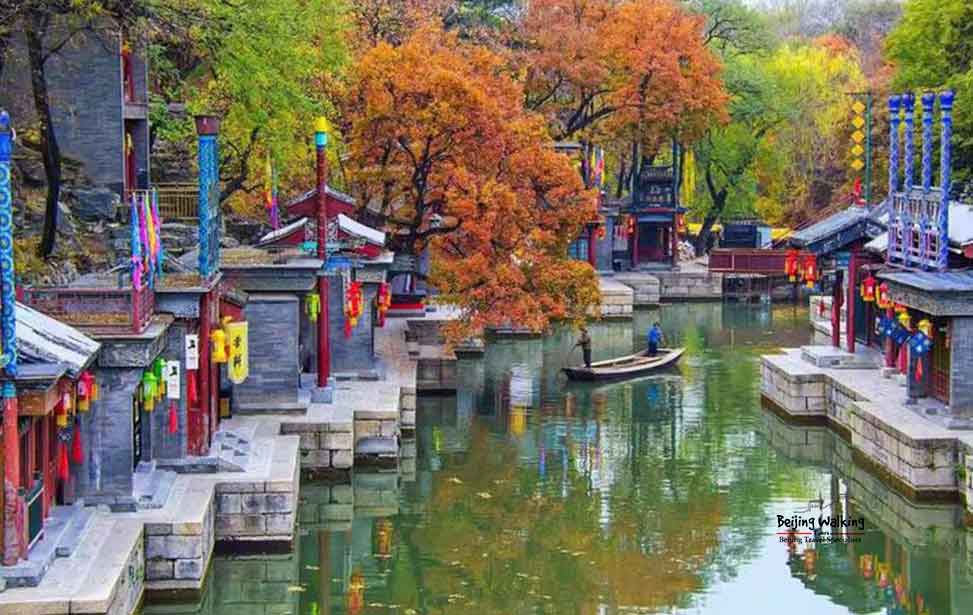 It was an imitation of a shopping street that flanked the river located south of the Yangtze River. The emperor and empress would arrive on a painted pleasure boat, or stroll on the street to listen to the people singing and chatting. Of course, the people were made up by the eunuchs and maids.

Boating in the Kunming lake 西湖游船 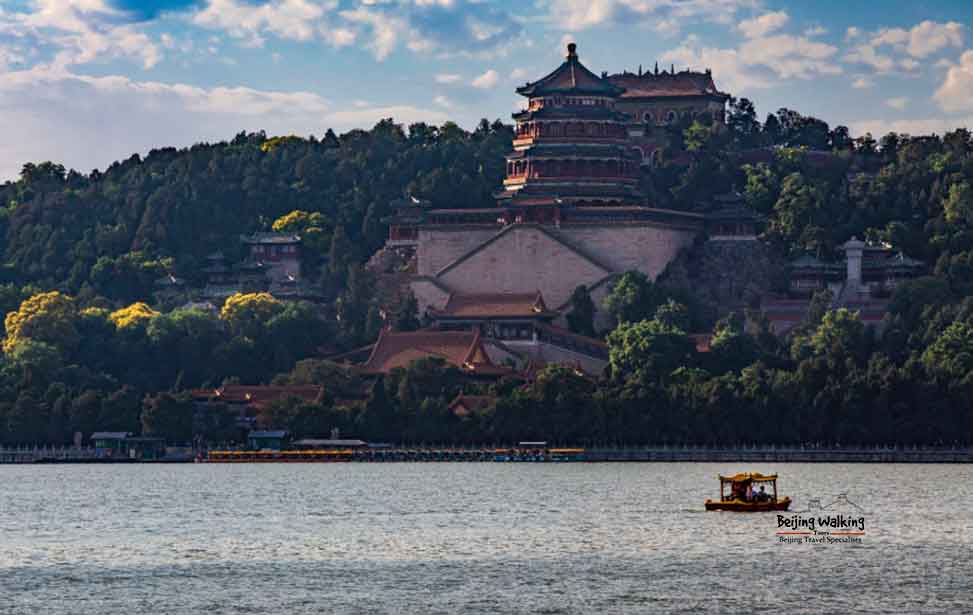 Except in the wintertime, you can take the ferry boat on the Kunming lake to enjoy the view of the summer Palace. You can also rent a small e-boat rowing on the lake.