How to visit Ming Tombs by Yourself? | Ultimate Travel Guide

The Ming Tombs are situated at the foot of the Heavenly longevity Mountain in the north part of Changping District, Beijing. It is called the Ming Tobs because ever since the Ming Dynasty moved the capital to Beijing, thirteen Ming emperors were buried there. Counting from the building of Changling tomb in 1409 up to the early year of the Qing Dynasty, the construction lasted for over 200 Years. There are the best completely preserved and most numerous emperors’ toms in existence in China.

If you are planning your Beijing trip and wondering if you are going there or not, this Ming Tomb blog has the MOST HONEST tip for you.

It is 45kms away from Tiananmen Square (Beijing center).

The ways to go by public transfer

2. Subway to Ming tomb station in Changping line. (It is still a 2 km walk to Sacrad way after the subway)

Off season: November to March

Tip:  You can buy the package ticket (110RMB in the busy season, 75RMB in the low season) if you like to see all of the 3 places and save your money.

A tour to the Ming Dynasty by 872 bus from Beijing

The bus schedule from 7 am to 8:10 pm, runs every half hour. If you want to see all the sites in the Ming tomb area, it is better to start earlier than 8 am. Take subway line 2 to Jishuitan station. Go out from exit B2. then walk 5 minutes to the east, you will find the bus station for the 872 bus. 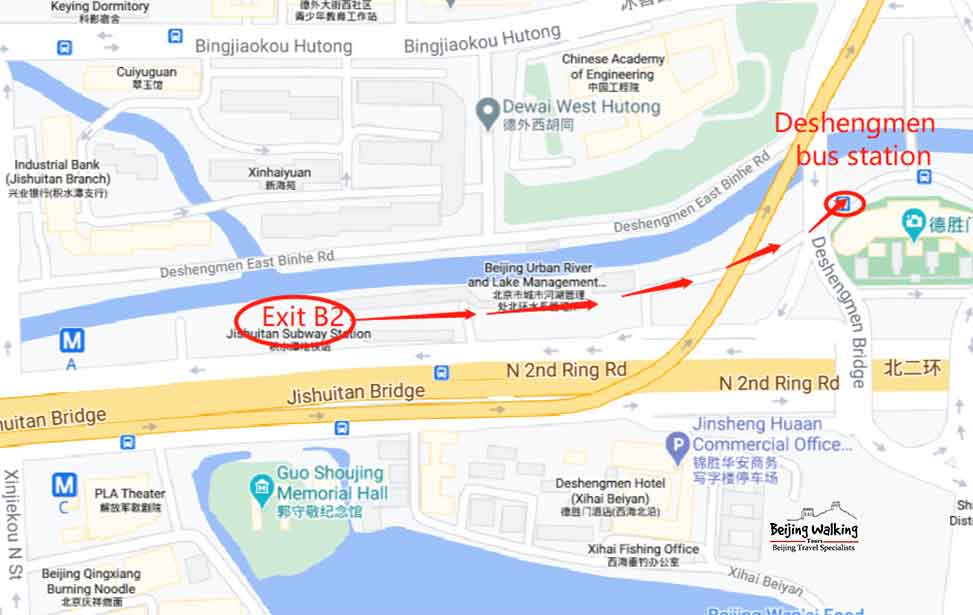 The bus runs every 10 minutes, if you are traveling during the Chinese holiday or weekend, it is a bit busy here.You need to go early and  wait at the bus station. 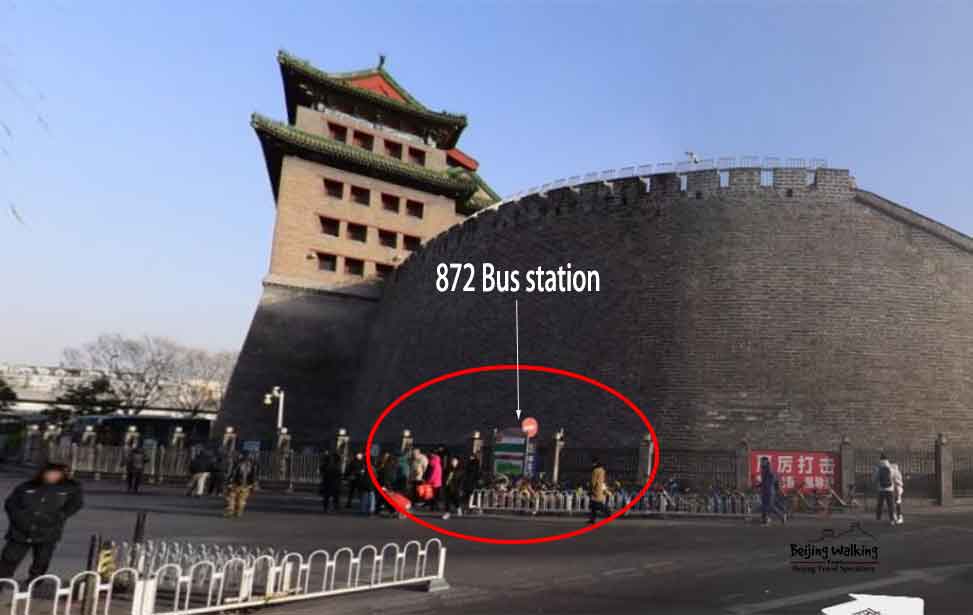 After 1 hour to get to the Dagongmen Station where you can see the entrance of the Sacrad way. 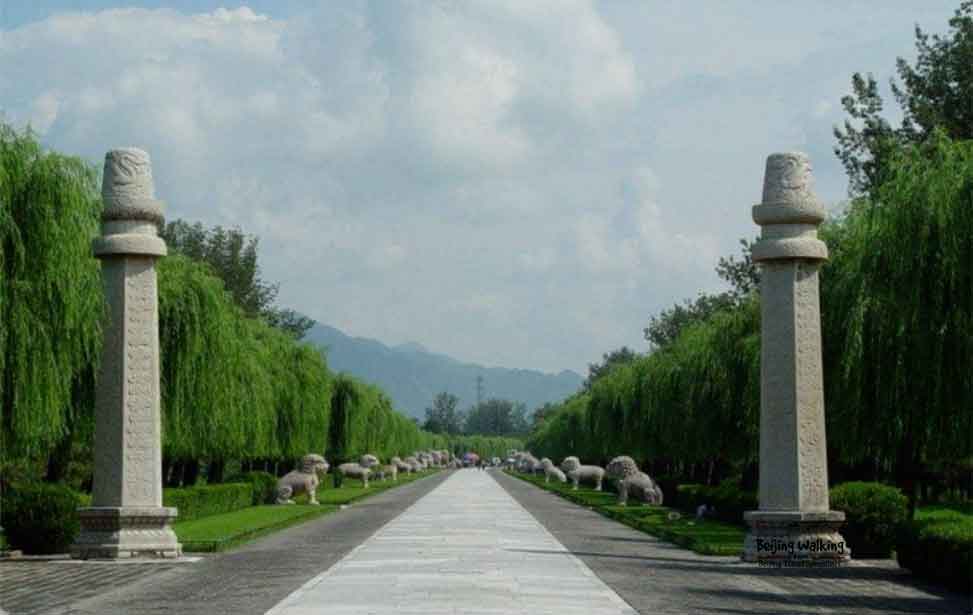 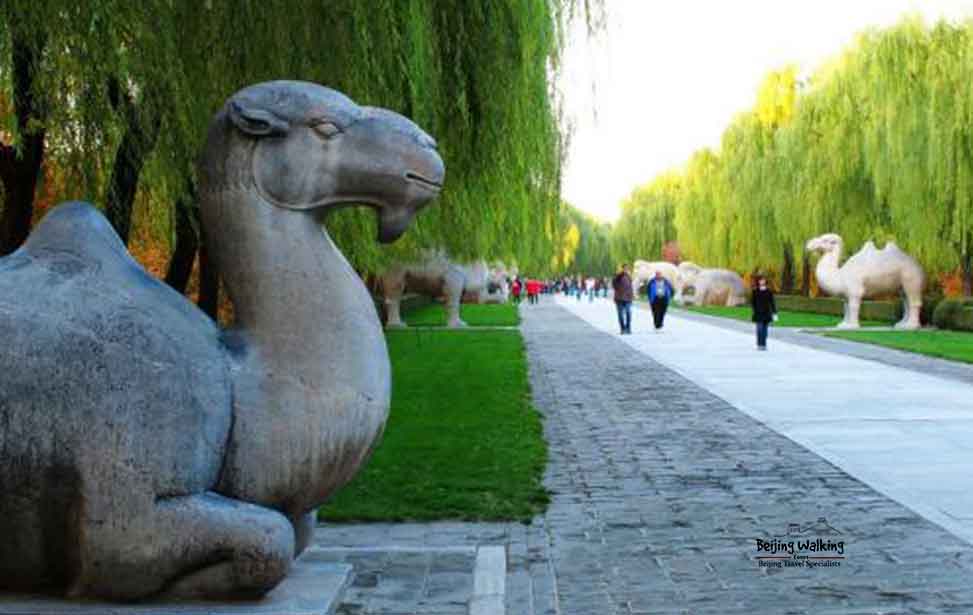 The total length of the Ming tomb sacred way is 7.3 km, only the place with stone Animals and statues charge you a ticket to visit. The animals and statues were created using whole blocks of stone weighing a couple of tons and each was delicately and masterfully carved. The animals are lion, Xie Zhi, Camel, Elephant, Kylin, Horse, General, Civil Officials, Officials of Merit. It is about 40 minutes to walk through the Sacred way from south to north.

From the North Gate, it is easy to find the bus station to Dinglinng tomb. There are many buses you can choose from. (314;878,872) The bus fee is 2RMB. It is about 20 minutes to get to Dingling Tomb. 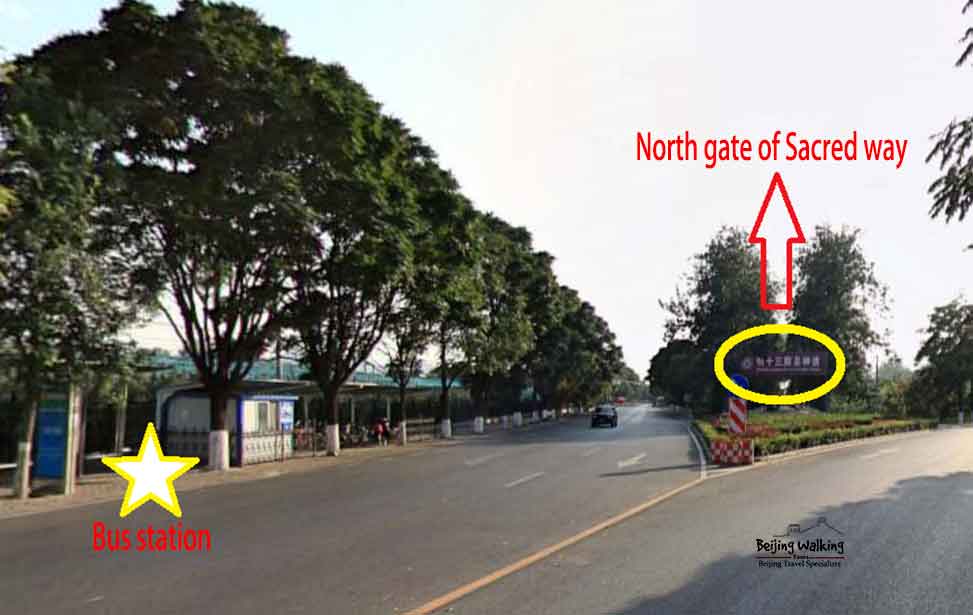 Dingling – See the underground palace of the Emperor 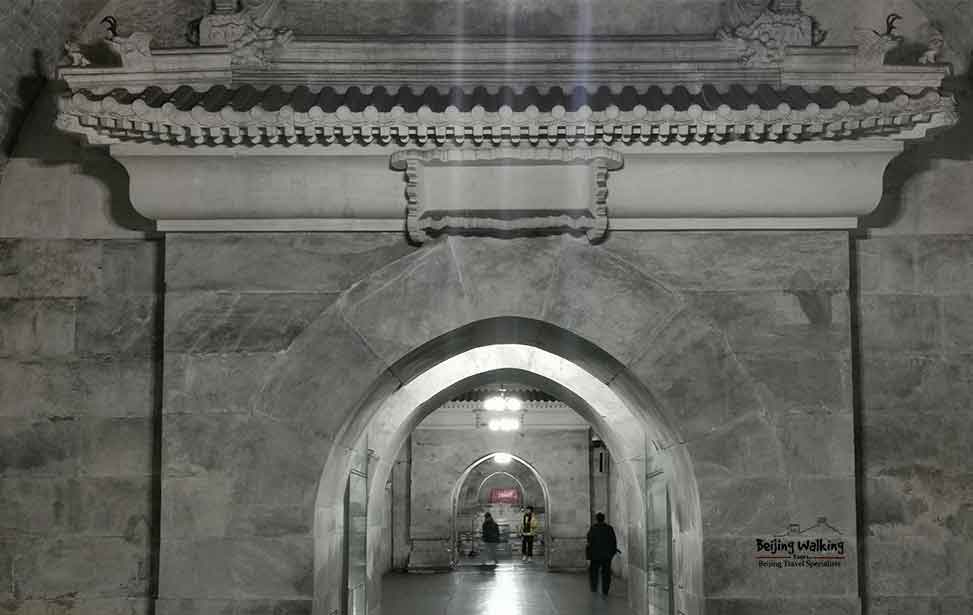 Dingling is located at the east foot of the Dayu Mountain. Buried here are the 13th Ming Emperor Wanli and his two empresses Xiaoduan and Xiaojing. Most of the buildings at Dings were destried. The most interesting thing to do is go down to the underground palace. The underground palace is 27 meters deep, covering an area of 1195 square meters. Marble was used to building the entire underground palace. This visit took me about 45 minutes. 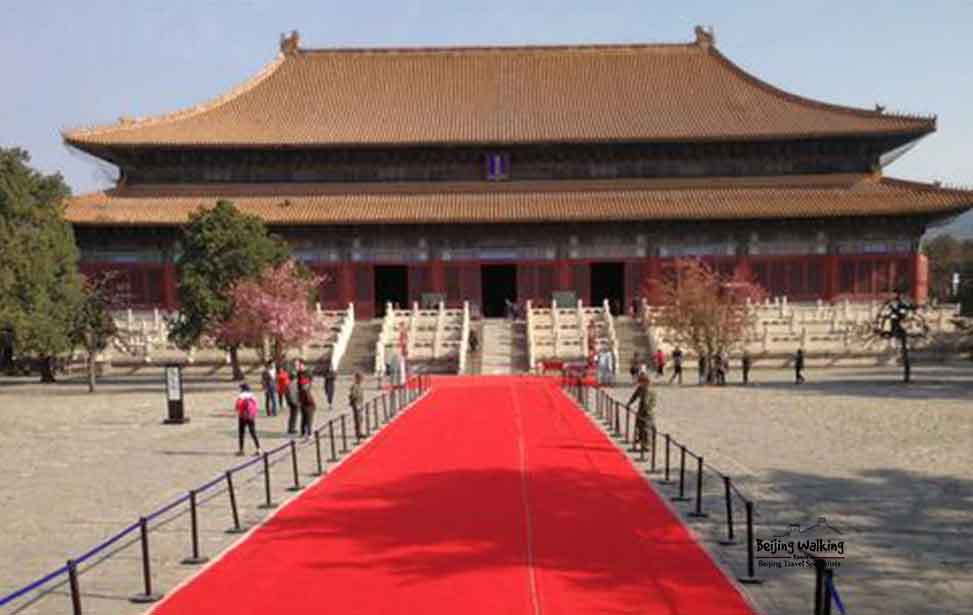 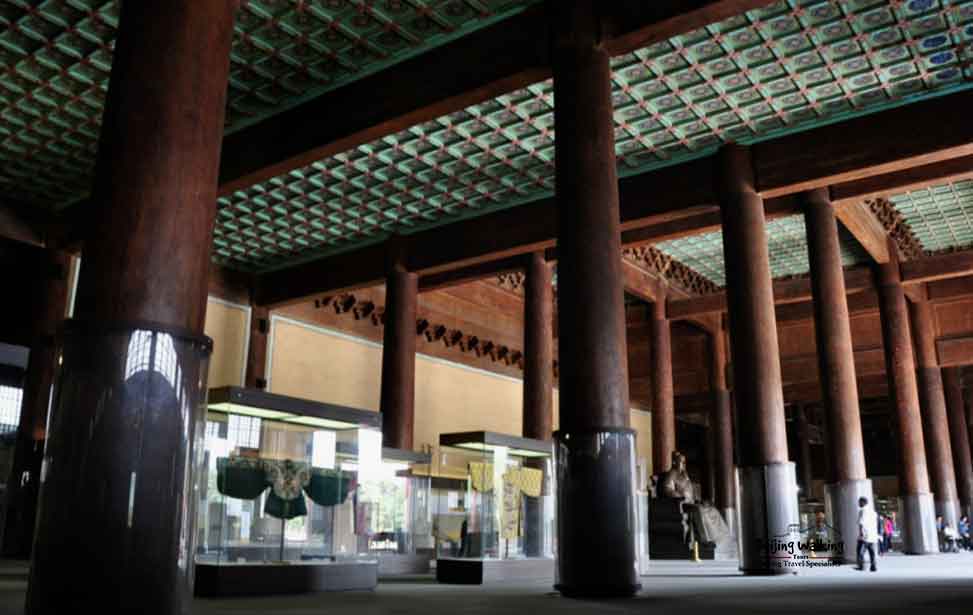 Changling is the tomb of Emperor Yongle and his empress. It took 18 years to have this tomb built. After 500 years. most buildings in this tomb area had been burnt down or destroyed; only Changling is well preserved. The whole tomb can be divided into 2 parts: the memorial hall was used for services commemorating the deceased emperor on special occasions or upon his anniversaries, while the inner court is the burial ground, also know as the underground palace.

Would highly recommend you do the trip like this: Sacred way – Dingling tomb – Changling tomb. The 872 bus back to the city starts from Changling tomb, so you can easily get a seat for the 1-hour bus journey.

The Dingling tomb is not recommended for seniors and little kids as there are many steps up and down to the underground palace. Especially it is not good for kids to go inside the tomb even though it is for the emperor in Chinese culture.

The Badaling Great Wall and Juyongguan Great Wall are not very far away from Ming tomb. You can take the 879bus from Changling or Sacred way to there. The bus journey is about 1.5 hours.

Is the Ming Tomb worth to visit？

This is a tough question, but it was the most popular question people ask me. So this is my personal suggestion:

If you want to take awesome photos only, for architecture, mountains, etc. Ming tomb is not for you. You can easily find more interesting architectures in Beijing City.

If you are very interested in Ming history as well as the imperial tomb system. This is a great place to visit. You 100% need to go to Dingling.

But if you have extra time and energy after the Great Wall trip. It is also great to go and have a  look. Walkthrough the Sacred way definitely gonna make your trip more interesting.

Which Ming tomb you should visit?

These are the highlights of the Ming tomb sights.

Changling: Best preserved Ming tomb as well as an exhibition of the unearthed relics from Dingling.

Use human beings as sacrifices originated from primitive society. Slave owners ofter had a lot of slaves and cattle buried alive with them as was discovered during the archaeological excavations. However, when it came to the Qin Dynasty, wooden and ceramic figures were used instead. Such as the terracotta warriors in Xian. Nevertheless, human sacrifice was prohibited for most part of the emperor’s funeral.

In the Ming Dynasty, the first emperor Zhu Yuanzhang resumed this barbarous practice. After his death, he even used 38 people as a sacrifice, mostly designated maids and his concubines. His sons and grandsons did the same. Emperor Yongle used 16 concubines. The relatives of sacrificed maids could be appointed a certain kind of official post and given certain preferential treatment. Ming Emperor Yingzong prohibited this practice.