There are so many interesting Galleries in the Forbidden City. Choose the one you like: 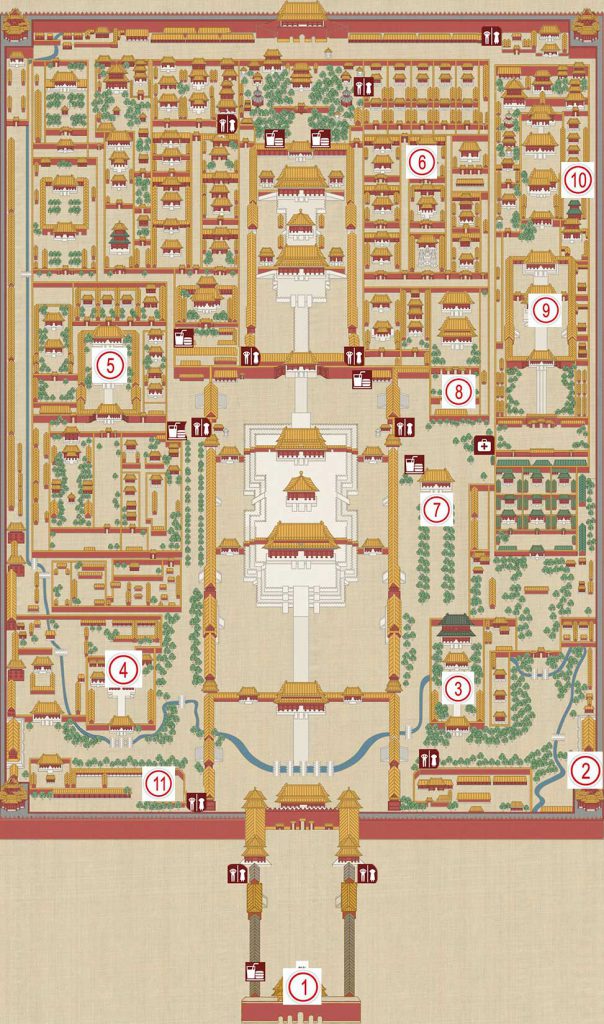 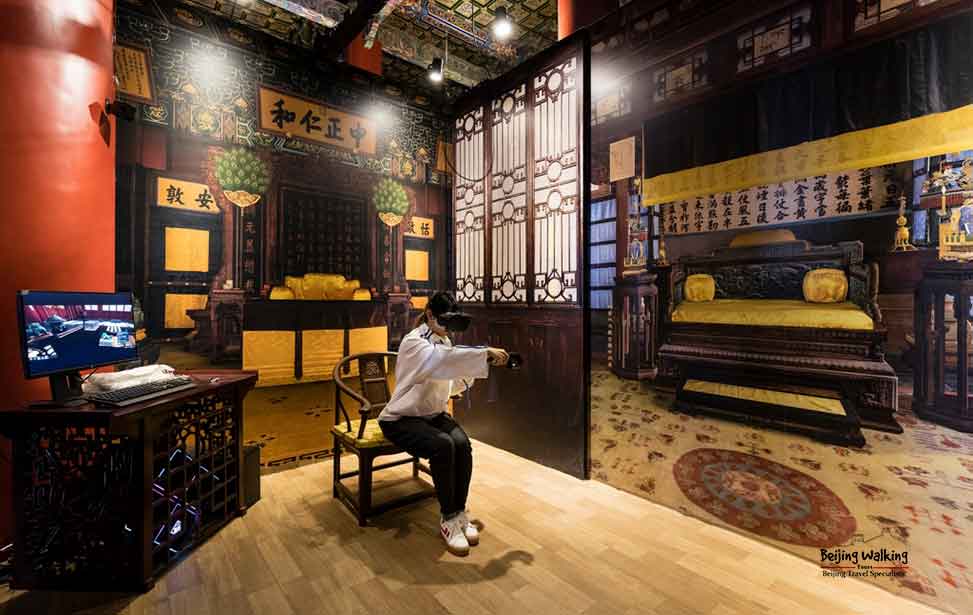 A new exhibition entitled “Discovering the Hall of Mental Cultivation: A Digital Experience” is now open to the public. The feature allows visitors new ways to explore the history of the Forbidden City and commemorates the ninety-second anniversary of the establishment of the Palace Museum, established on October 10, 1925. Adding to the Museum’s innovative displays, this exhibition merges traditional Chinese culture and contemporary technologies. 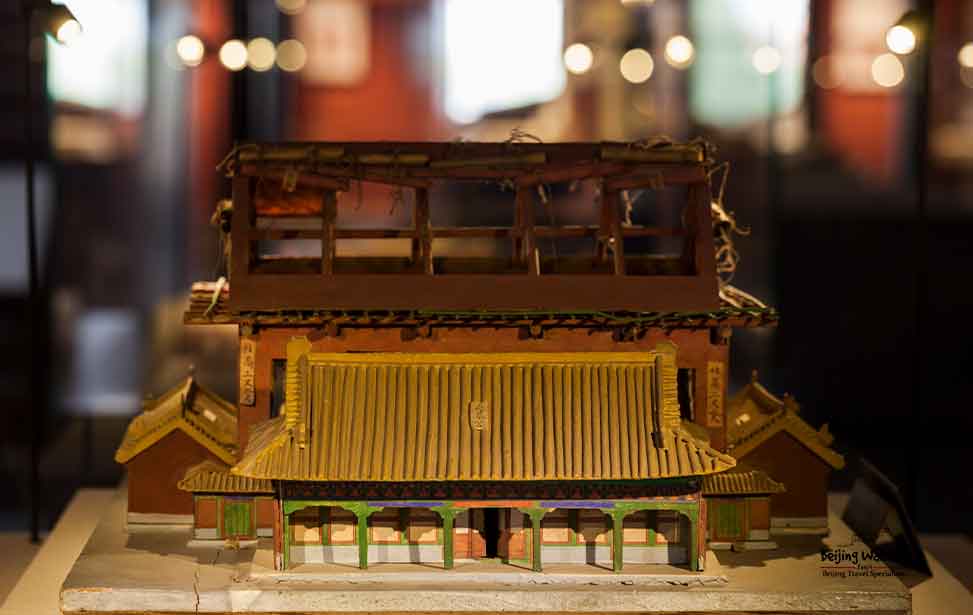 The Gallery of Historic Architecture in the vicinity of East Prosperity Gate occupies four major sections: the city wall between the Meridian Gate (Wu men) and the East Prosperity Gate, the southeast corner watchtower, the East Prosperity Gate, and the area around the office of Imperial Procession Guards (luanyi Wei). The city wall section does not house exhibitions but serves as the major passageway between the historical buildings and the key venue for outdoor displays. The corner watchtower is the home to the themed exhibition “Timber Structures of Historic Architecture”, featuring such contents as multi-media productions, architectural drawings, and charts (with a three-sided cone rotating display fixture), the main structure and model of the watchtower. The exhibition gallery at the East Prosperity Gate hosts the special exhibition “Ancient Architectural Designs”, consisting of four units: “Planning and Design”, “Interior Decoration and Design”, “Tilework and Design” “Colored Painting and Design”. The exhibition gallery in the Office of the Imperial Procession Guards has the themed display “Masonry and Preservation of Historic Architecture”, including a warehouse-style exhibition area for stone relics, a conservation studio for stone relics, and a service area for the public.

3.Gallery of Painting and Calligraphy书画馆 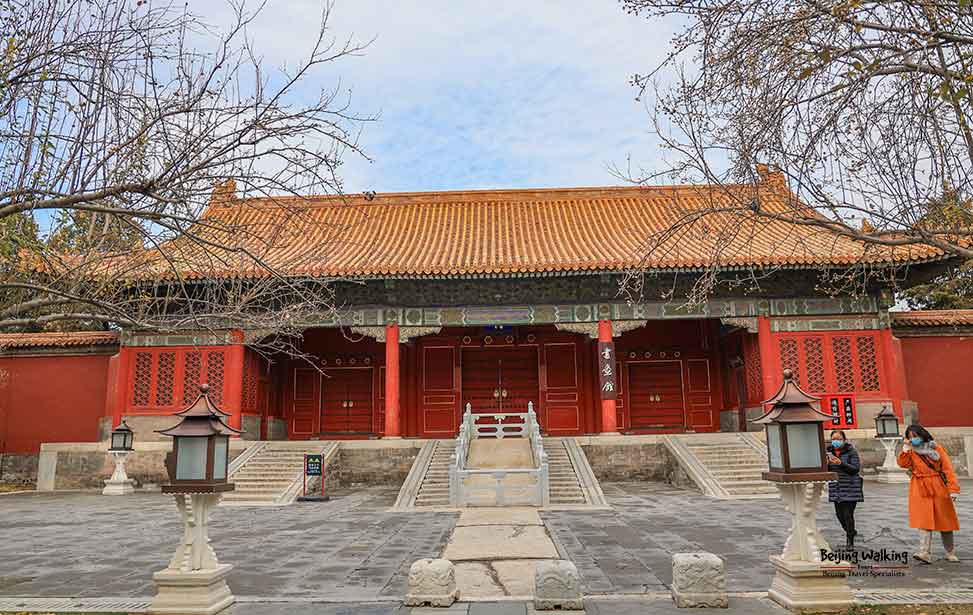 The Hall of Literary Brilliance (Wenhua dian) is the main building is an architectural compound that lies to the far east of the Hall of Supreme Harmony (Taihe Dian).
It was the residence of the heir apparent during the early period of the Ming dynasty (1368-1644), with green glazed tiles covering the roof. Since 1536, it was reserved for the emperor as his secondary hall. Accordingly, the tiles were changed into yellow, the color of the emperor. During the Ming and Qing dynasties, the imperial lecture was regularly held in this hall, and papers of the “Palace Examination” were reviewed here, too. Those prominent mandarins would feel so honored to be given the title of the “Grant Secretary of the Hall of Literary Brilliance”. 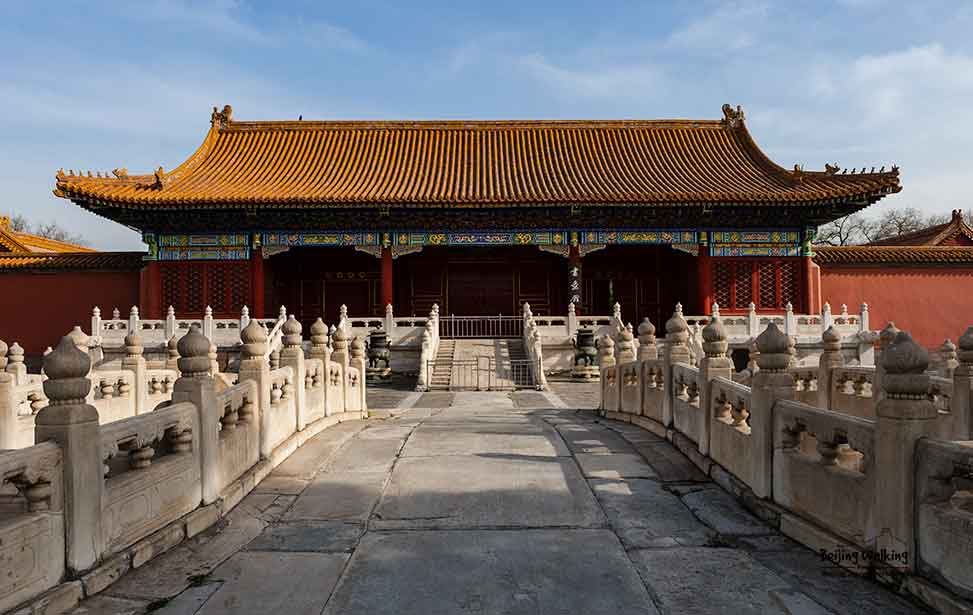 The Hall of Martial Valor is the main building in an architectural compound that lies to the far west of the Hall of Supreme Harmony (Taihe Dian). The side halls are reserved as the gallery of Books and Archives. 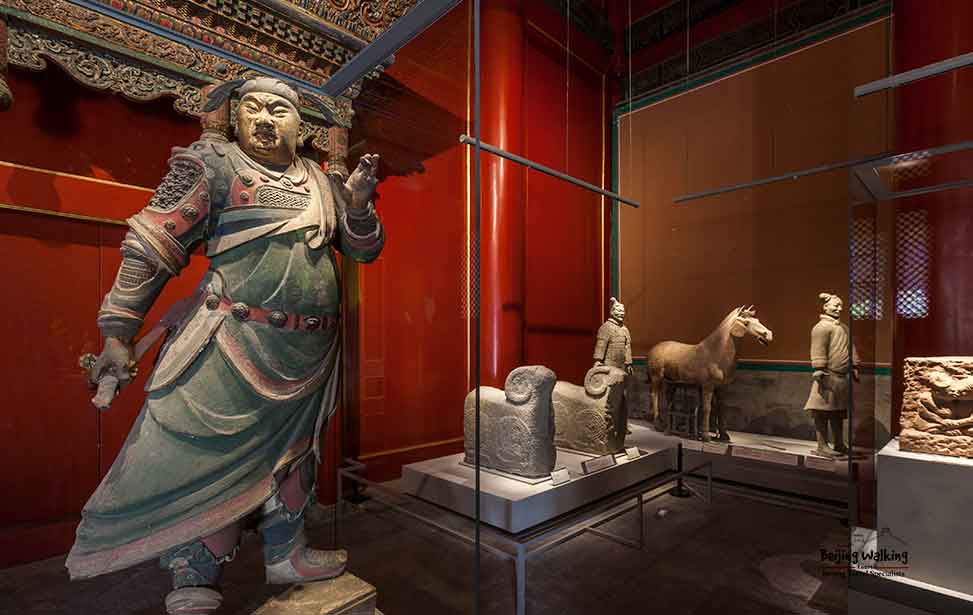 The Palace Museum Sculpture Gallery is located in the Palace of Compassion and Tranquility, with five exhibition galleries entitled: Supreme Sculpture, Han and Tang Terracotta Figures, Stone and Brick Reliefs, Xiude White Stone, and Buddhist Statues. The display area is about 1,375 square meters, with a total of 425 exhibits. 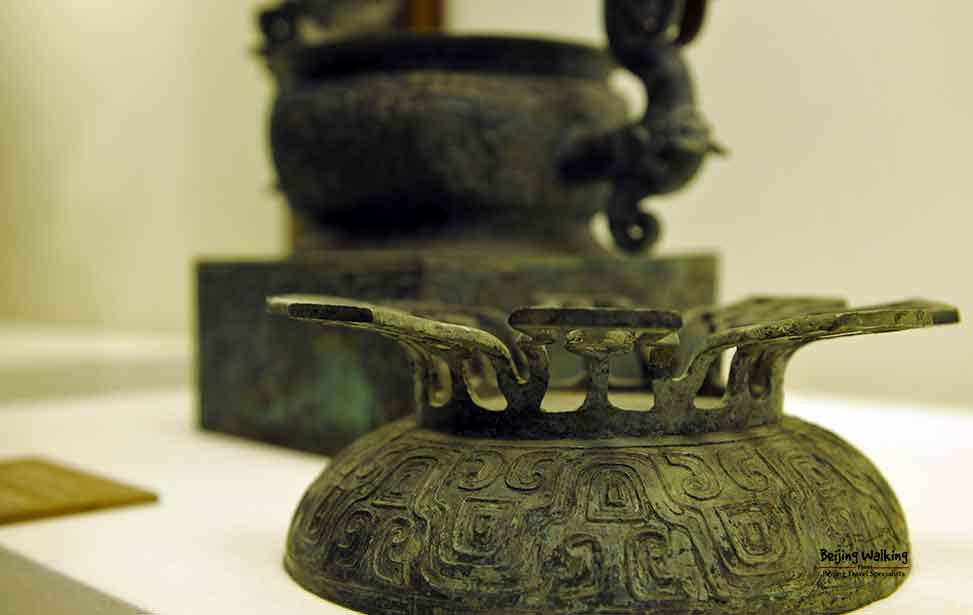 The Bronze Gallery is located to the east of the Forbidden City’s three rear halls within the Palace of Celestial Favour (Chengqian gong) and the Palace of Eternal Peace (Yonghe gong). These magnificent structures are located among a cluster of small courtyards that served as the living quarters of the imperial family during the Qing dynasty (1644–1911). The two palaces have been fitted with new installations and are now known collectively as the Bronze Gallery.

7.The Tools of War Gallery武备馆 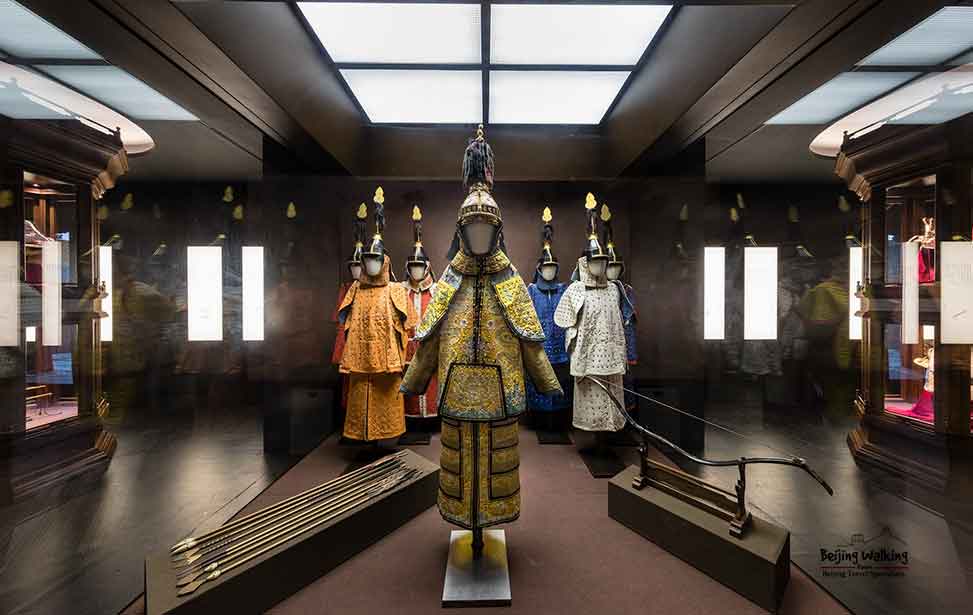 “In times of peace, do not forget to be ready for war”.

A hall for archery was first built in front of the Hall for Ancestral Worship (Fengxian dian) during the reign of the Shunzhi Emperor (r. 1644-1661) in the early Qing when mounted archers were brought into the core of the dynasty’s military forces. The Kangxi Emperor (r. 1662-1722) later led his sons and those bodyguards who were skilled archers to shoot arrows here. The hall was then transformed into the Archery Pavilion (Jian ting) during the subsequent Yongzheng reign (1723-1735), following which the Qianlong Emperor (r. 1736-1795) summoned the best candidates of the imperial military examination here and presided over final examinations for archers and horsemen. 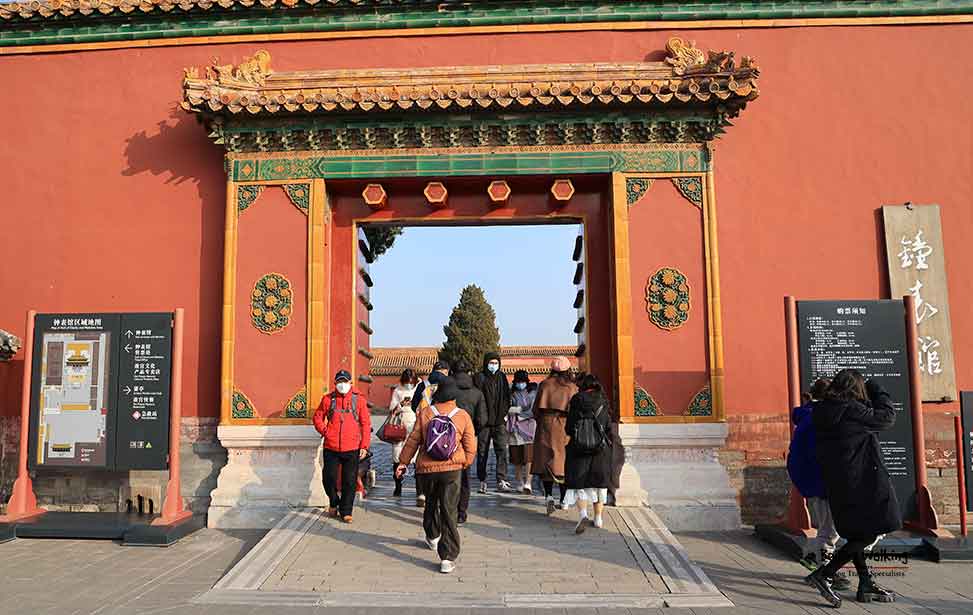 Open to visitors since January 17, 2019, the new Gallery of Clocks is located in the buildings south of the Hall for Ancestral Worship (Fengxian dian). The gallery features eighty-two timepieces from the Museum’s collection; of these, twenty-one were made in China and sixty-one were manufactured overseas. Twenty of the pieces now on view have never before been displayed to the public. The permanent exhibition has six sections showcasing timepieces from the Qing imperial workshops, Guangzhou, England, France, Switzerland, and other countries. Divided into two exhibition spaces, the gallery especially highlights clocks manufactured or acquired during the Qing dynasty (1644–1911). 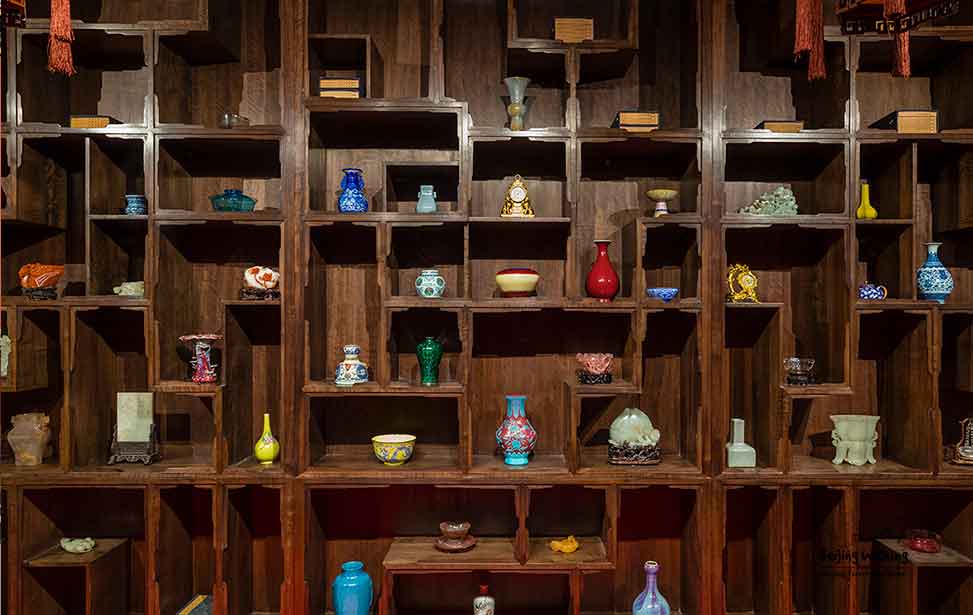 The Treasure Gallery is a series of exhibition spaces in the northeast part of the Forbidden City in an area of the Museum known as the Palace of Tranquil Longevity Sector (Ningshou gong qu). It consists of six gallery rooms displaying pieces from the imperial collection and extant accouterments for palace life. All of these exquisite items are made of precious materials, such as jade, jadeite, gold, silver, pearls, and other precious and semi-precious stones. The superb craftsmanship and inestimable value of each piece are aptly summarized in the title of the gallery. 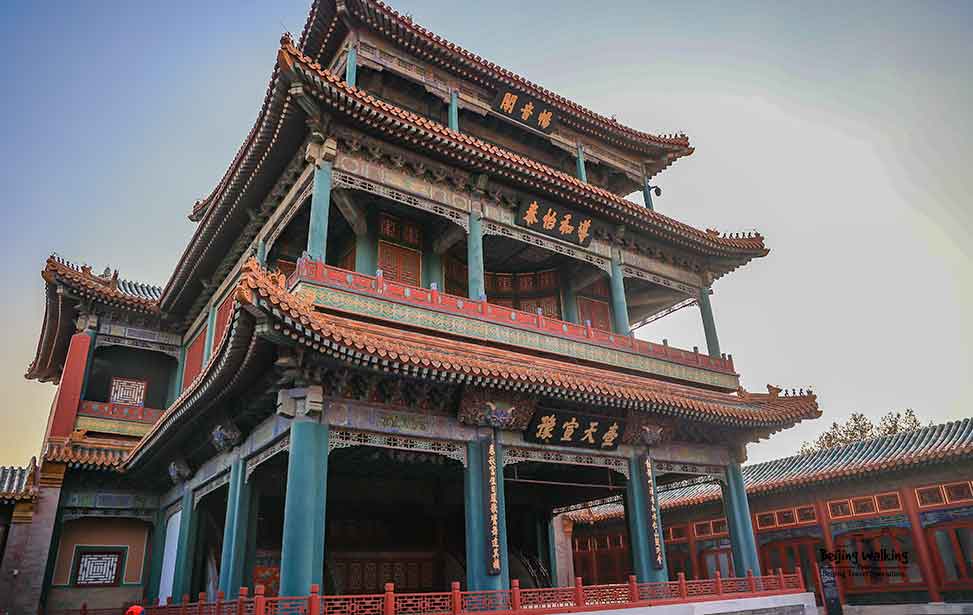 The Belvedere of Pleasant Sounds (Changyin ge) and the Hall for Viewing Opera (Yueshi lou) served as the theatre of the Qing imperial palace. The spaces have now been converted into the Gallery of Qing Imperial Opera. This showcase presents all aspects of the imperial theatre. 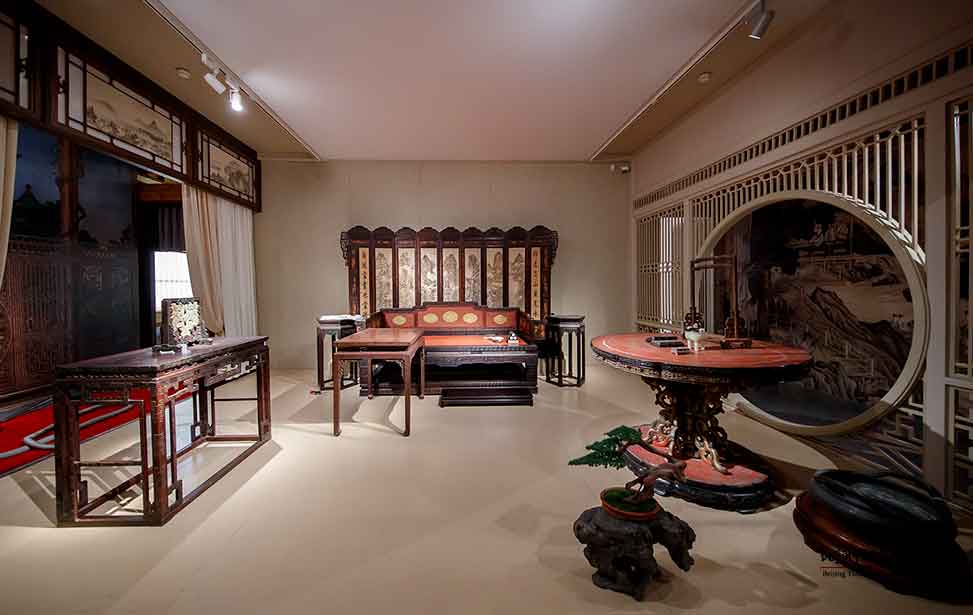 The Palace Museum’s Furniture Gallery opened in September of 2018. Dedicated to one specific form of art, the gallery is similar to the Ceramics Gallery, Calligraphy and Painting Gallery, and other galleries showcasing their respective forms of art. The initial exhibition space of the Furniture Gallery is located in the southwest sector of the Forbidden City in an area known as the South Storehouses. This first-phase exhibition includes a display of over 300 pieces or sets of Qing-dynasty (1644–1911) furniture used by the imperial court.