The Ultimate Guide To Visit Beijing Temple Of Heaven

Temple of Heaven is an enduring symbol of Chinese ancient imperial power that has stood welcoming people to Beijing. She is an iconic symbol of old China, and one of the very first things built in the Ming Dynasty when they move the capital from Nanjing to Beijing. 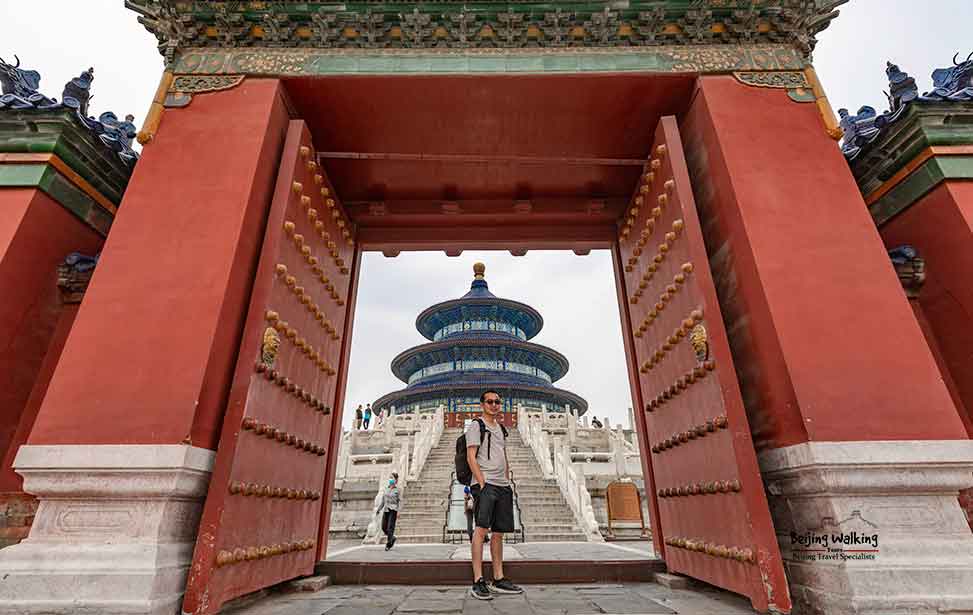 The nearest subway station is Tiantandongmen station in line 5.  Take a taxi to the east gate: Please take me to the East Gate of Temple of Heaven 请带我去天坛东门

The palace for Abstinence; Butcher Pavilion：

There are many different prices for the tickets, buy the through Tickets which allows you to visit all the other garden inside.

How to buy the Temple of Heaven tickets?

You can either go to the entrance to buy the tickets or use wechat to book it online. At wechat, you should search “天坛门票”. Don’t forget to bring your passport with you.

At each entrance of the Temple of Heaven, you can find the audio guide. The Chinese Language is 20RMB, any other language is 40RMB. 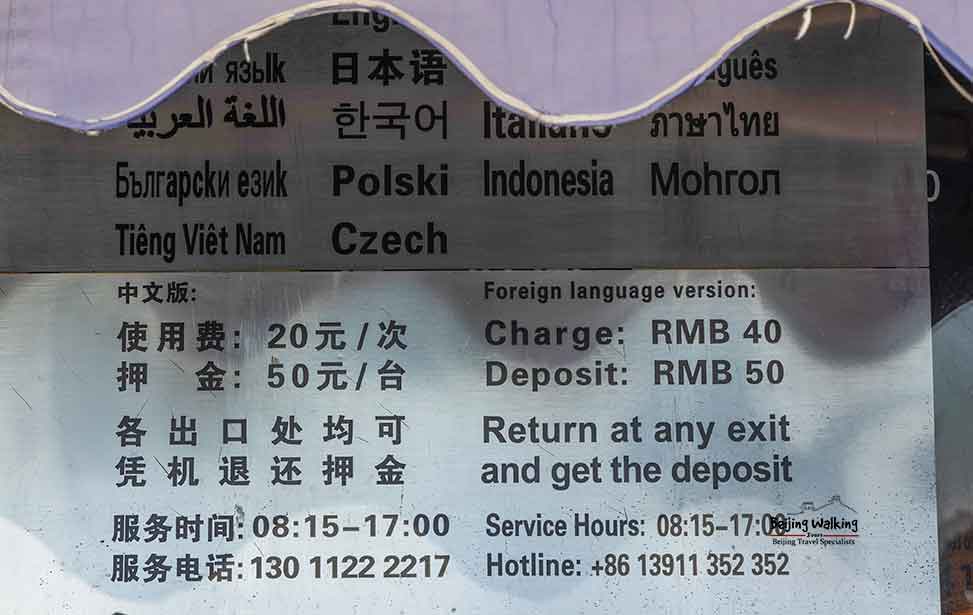 It is easy to buy water and snacks in the Temple of Heaven, there are many restaurant options near the east gate and south gate.

1420 – The Ming Emperor Yongle Zhu Di moved the capital moved from Nanjing to Beijing. The temple was built by copy the Temple of Heaven and Earth in Nanjing. The Main building is called the Hall of Dasi.

1530 – Ming Emperor Zhu Houcong built the Circular Mound Altar at the south of the Temple of Heaven and Earth to worship heaven. And built the Temple of Earth at the north of the Forbidden City. Hall of Dasi is renamed Hall of Daxiang for praying for good harvest and the roof has 3 colors (blue, yellow, and green)

1791 –  Emperor Qianlong in the Qing Dynasty change the name from Hall of Daxiang to Hall of Prayer for Good Harvest. Change the roof with only blue color.

1911 – The worship of Heaven was abolished

1918 – The Temple of Heaven was officially open to the public. 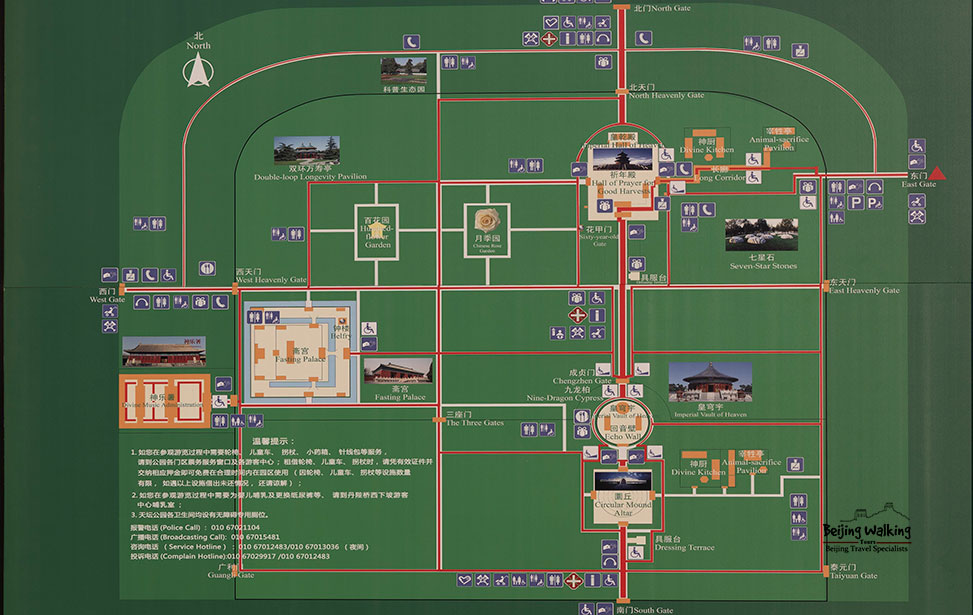 There are 2 altars: the Circular Mound Altar in the south and the Altar of Praying for grain in the North. The 2 Altar are connected by the Red Stairway bridge.

The axis of the Temple of Heaven running from north to south, connecting the Circular Mound Altar and the Altar of Praying for Grain. Usually, you can walk through the Axis and don’t miss all the highlights.

Start from the east gate 东门晨练

The most interesting for travelers is to watch the locals doing morning exercise. This is a good way to enjoy the authentic local life, the exercise starts early in the morning till 11 am. You can also find the wedding market near the 7 start stone. 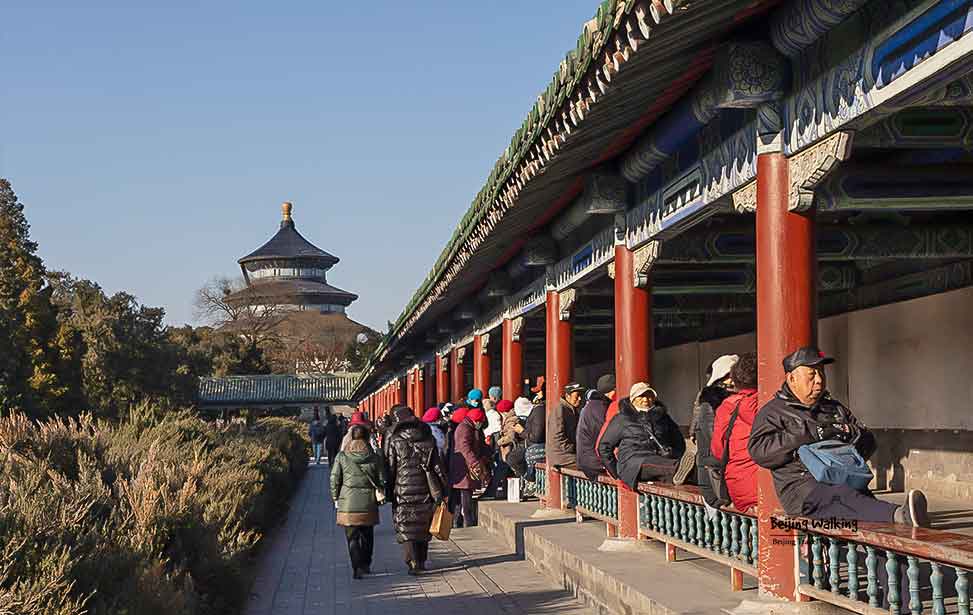 Located outside of the Hall of Prayer for Good Harvest, it has 72 rooms lined along its length. It is used to prevent the contamination of sacrifices by rain, snow, and sandstorm. 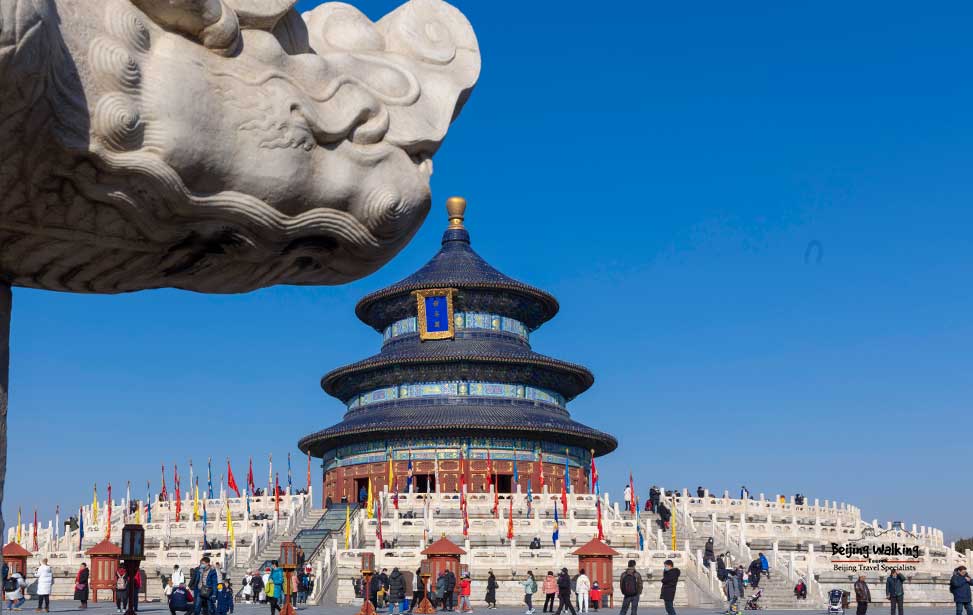 This is the most famous building of the Temple of Heaven. It is 31.78 meters high and integral structure joined together with wooden parts of tenons and mortises. Its magnificent appearance could reasonably bear not only its own weight but also any outside force. 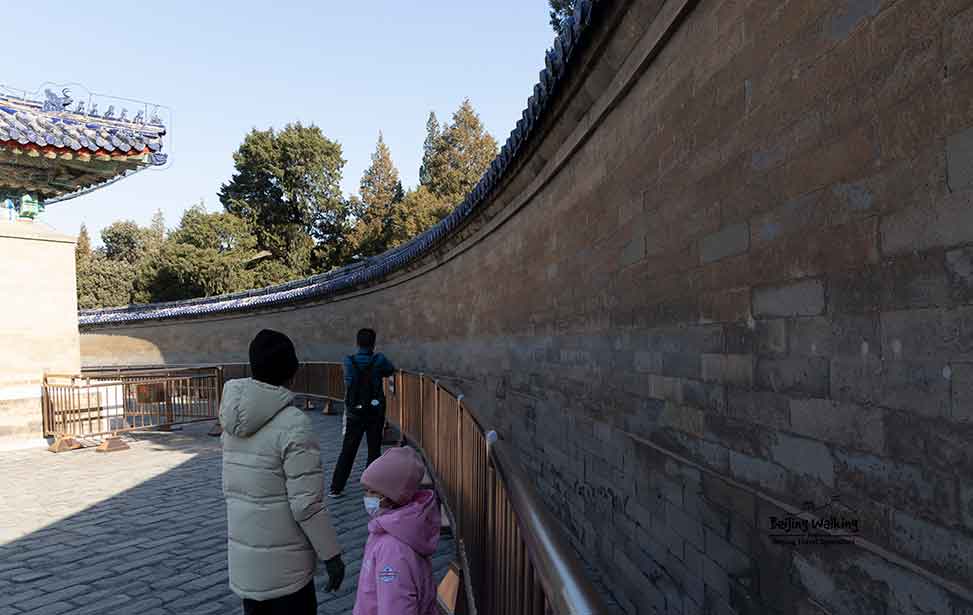 The echo wall is the wall of the Imperial Vault of Heaven. It is a good carrier of sound. It is very smooth and the bricks of the wall are perfectly matched, so it creates a good echo sound effect, therefore it was later named the Echo Wall 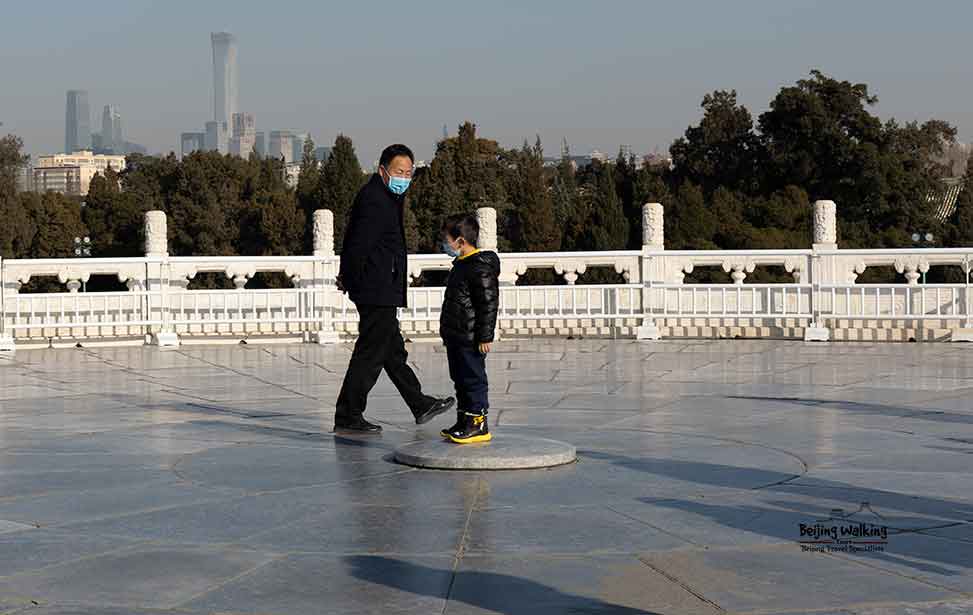 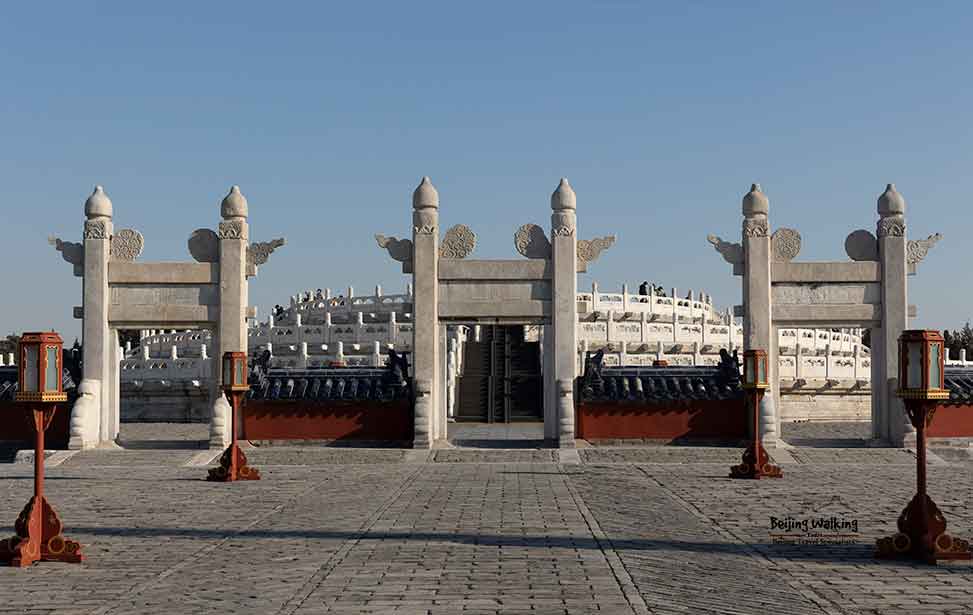 The Circular Mound Altar was built in the 9th year of Ming Emperor Jiajing’s reign (1530). At the center of the upper terrace lies a round stone surrounded by 9 concentric rings of stones. It is called the Heaven center stone. If you stand on the stone, you can hear very loud echoes. It is because it is at the same distance from 4 directions, so the echo comes back at the same time. It is a must-do on your visit.

Interesting Facts of Temple of Heaven

The 7 starts rock has 8 rocks 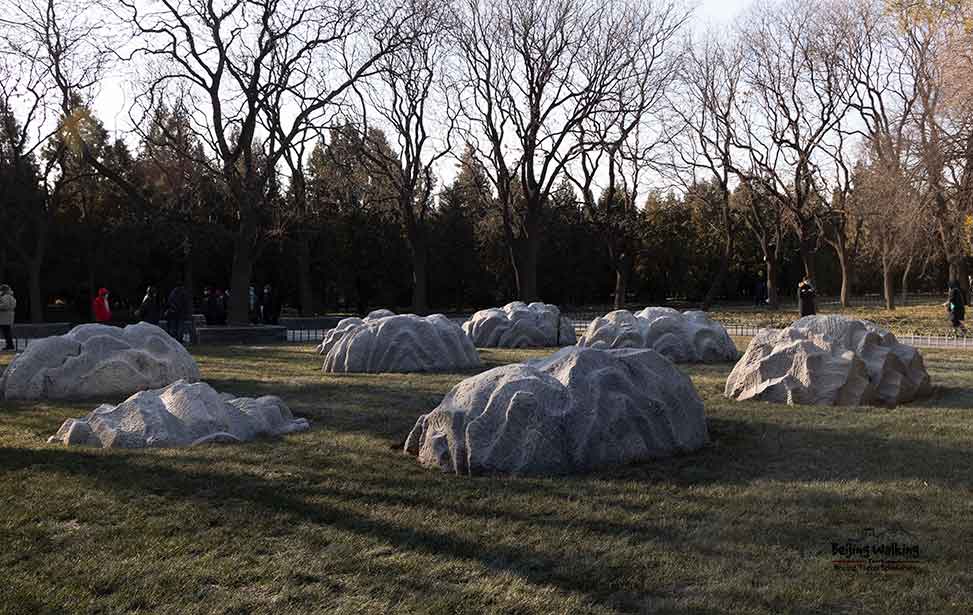 The 7-stars means the Big Dipper which is put here for stabilizing purposes. The Temple of Heaven is built in the Ming Dynasty, but the Qing Dynasty still uses it here. Qing emperors are Manchu, they want to rule the Han people which is the majority. They want to make the Manchu and Han into 1 family, so they put a small rock on the northeast side. Actually, do you notice that the Big Dipper really have a small start next to them, it is hard to say they are not together? You can check it in the evening.

Why the temple of heaven built in the southeast of the Forbidden City?

In ancient China, there is an old saying “Heaven South, earth North”, Heaven and earth are a pair of Ying-Yang (Yin-Yang saying). China is in the Northern Hemisphere, the sun is in the south most of the time. So south is consider super Yang for heaven on the other hand the north is Yin for the earth.

There is an axis in Beijing, all the emperor’s palaces in the axis. So if he built the Temple of Heaven, it is not respectful as his throne directly faces the Temple where he used to worship his god.  The sunrises from the east so east are believed close to heaven.  That’s why the Temple of Heaven is built in the southeast of the Forbidden City.

All the main building in the Temple of Heaven is round 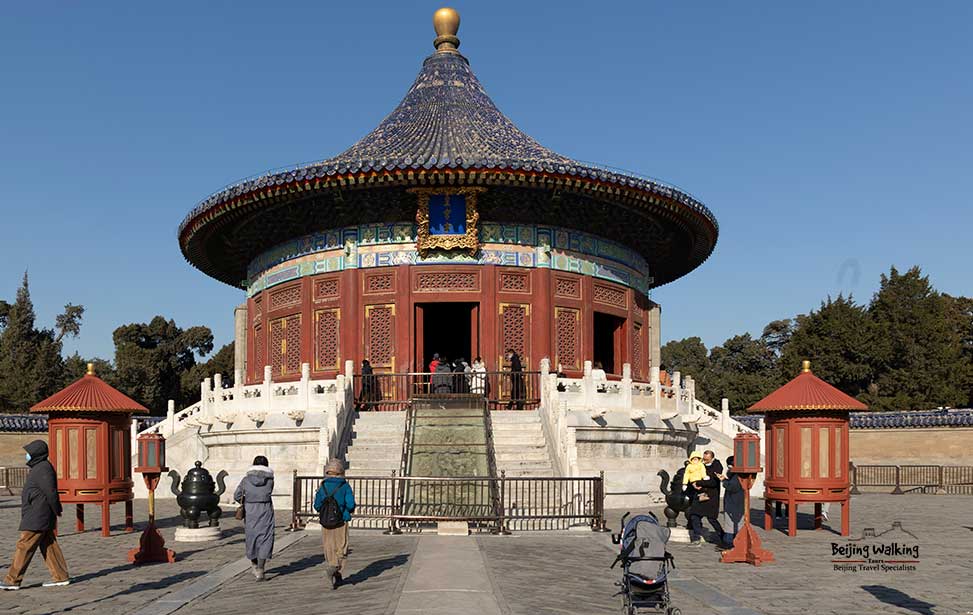 The Hall of prayer for good harvest, the imperial vault of heaven, and Circular Mound Altar are all-round building. This is because the Chinese believed heaven is round and the earth is square in the old days.

What do the triple eaves mean of roofs mean?

The Hall of Prayer for good harvest is the most amazing architecture in the Temple of Heaven. More Eaves means more important. Only in the Forbidden City and confusions temple, you can find the building with 2 levels of eaves. To show sincere respect to Heaven, the temple of Heaven built triple eaves.

How to send an invitation to god for worship? 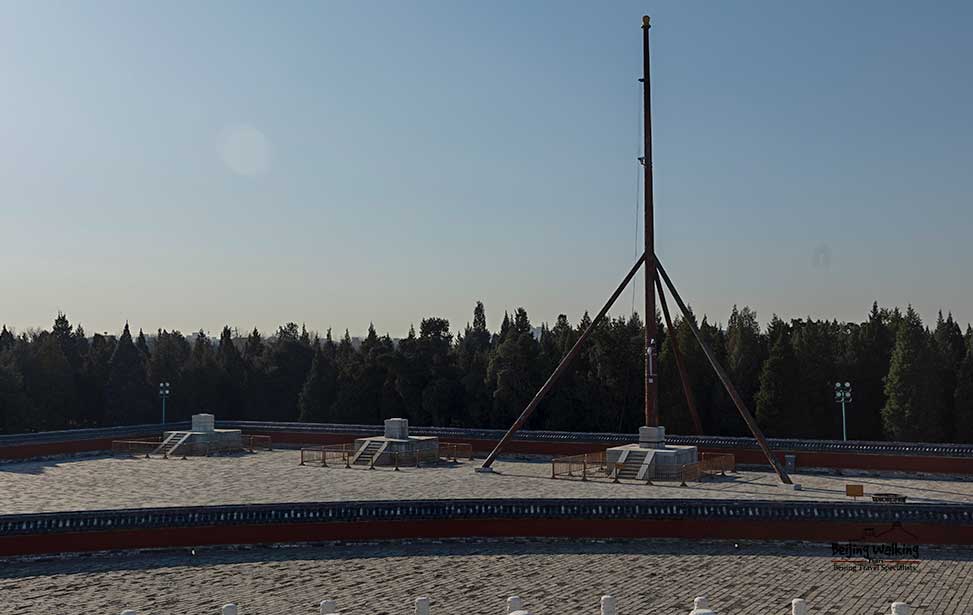 The temple of Heaven is build based on Taoism, there is a Jade Emperor who lives in Heaven, he sends his son to earth to rule the people and his son is the emperor who lives in the Forbidden City. The emperor came to the Temple of Heaven every year for the party ceremony, but how to let the god know? There are 3 high poles put outside of the temple, when the ceremony starts, people put 3 big lanterns on the top which means give a signal to the god there is a banquet for him. 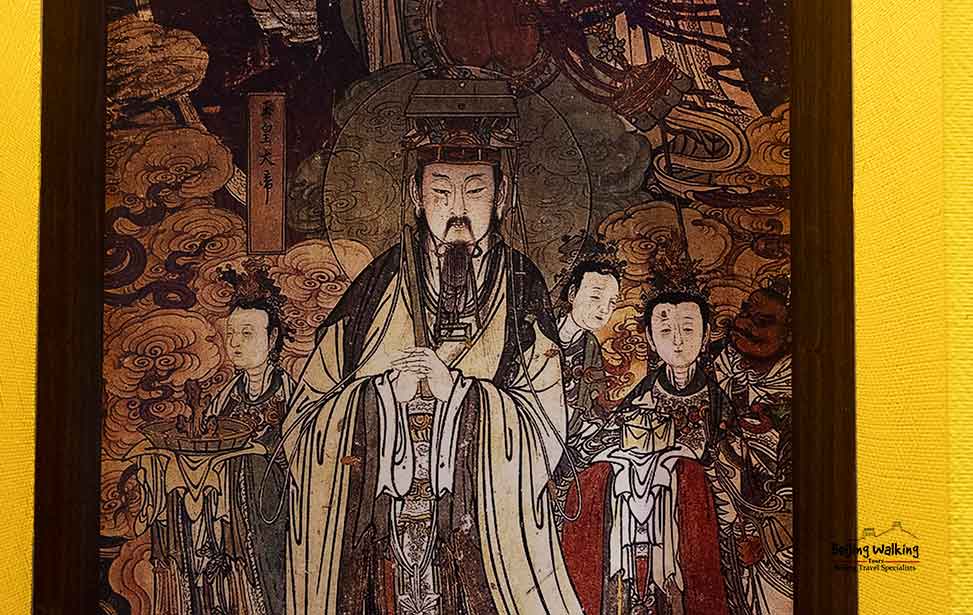 To understand the secret of 9 and 5, it is better to read 11 Forbidden City Facts You (Probably) Didn’t Know, I have described the relationship between the 9 and 5. At the Circular Mound Altar, the upper terrace is 9 Zhang(=30 meters) in diameter, the middle terrace is 15 (3*5) Zhang in diameter, and the bottom terrace is 21 (3*7) Zhang in diameter. These figures involve the five Yang Numbers. (1,3,5,7,9) The sum of the diameters of the three layers of the terraces is 45 (5*9) Zhang.

At the center of the upper terrace lies a round stone surrounded by nine concentric rings of stones. The number of stones in the first ring is 9, in the 2nd is 18 and so on till 81 in the last 9th ring. The middle and bottom terraces also have 9 rings each. Ancient architects used the ultimate Yang number 9 to endow the Circular Mound Altar with the idea of the “Sublime”

The Numbers in Hall of Prayer for Good Harvest

The hall has 28 massive wooden pillars, forming inner, middle, outer concentric rings of pillars. The space between the two neighboring central pillars represents spring, summer, autumn, and winter. The inner ring symbolizing the twelve months and 24 solar terms and the outer ring the twelve divisions of the day and night.

Is the Temple of heaven open on Monday

Yes, it opens every day.

How to buy the tickets for the Temple of Heaven?

For foreigner tourists, it is easy to buy the tickets from the ticket office. But you need to show the passport to get the real-name ticket.

All the parks in Beijing haven’t opened the English sites for the entrance tickets yet. (Such as Forbidden City, Temple of Heaven, and Summer Palace)

In case there are changes I didn’t update on time, check the Temple of heaven official sites here: http://www.tiantanpark.com/

Things to do near the Temple of Heaven.

There are not many tourist sites near the Temple of Heaven, but the Hongqiao Market is an interesting place to go. You can go there to get some nice souvenirs. There is a food court on the -1 floor where you can find all types of food.